In 2016, there were 50 ocelots left in the Lower Rio Grande Valley. The species used to roam as far north as Arkansas and as far east as Florida, but now all that remains is a small population in Texas’ Lower Rio Grande Valley, a region with breathtaking biodiversity and a host of threats. The Lower Rio Grande valley is in a period of massive expansion and development. Hidalgo County is one of the 12 fastest growing counties in all of Texas, and there is a lot of pressure to develop liquid natural gas resources, build wind farms, and permit SpaceX to build a launch site, not to mention the proposed border wall and its associated buffer zone. All these threats aligned against conservation in the region make the task seem daunting, but due to the near-extinct population of ocelots, it is imperative to act now.

American Forests has partnered with the U.S. Fish and Wildlife Service (USFWS), Friends of the Wildlife Corridor, and other conservation partners to replant the native Texas thornscrub that is necessary for the ocelot’s survival.

“To survive in the U.S., this beautiful and furtive creature needs the thick native south Texas thornscrub, a diverse combination of trees and shrubs that also supports more than 530 species of birds and about 40% of all North American butterfly species (330+ species), as well as a growing eco-tourism economy that travels here to view wildlife,” said Sharon Slagle, President of Friends of the Wildlife Corridor.

Unfortunately, according to Friends of the Wildlife Corridor, almost 97% of the native thornscrub has been lost to development. It isn’t too late to bring the ocelot back, but efforts take time and money.

For each planting effort, the Fish and Wildlife Service survey the plot, identify around 80 species of plants, and decide in what proportion they should be planted. After the species are identified, seeds are gathered locally and then grown as saplings in USFWS nurseries before finally being planted. The Lower Rio Grande Valley’s nursery produces an estimated 80,000 seedlings each year which can then be planted around the valley according to the initial surveys.

Understandably, the process of preparation and planting involves intensive planning and can be costly. 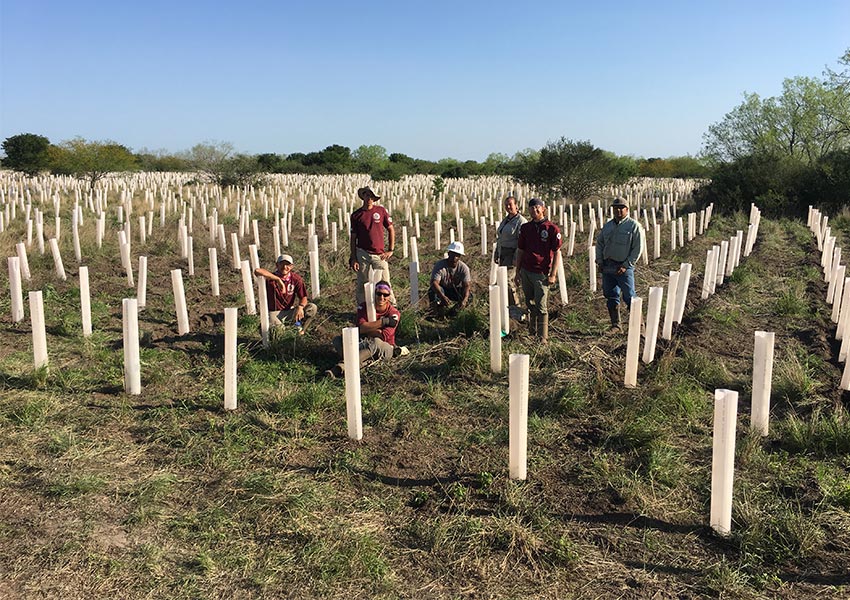 “A key challenge for the work of the Reforestation and Restoration Program is funding,” said Slagle. “We have been fortunate to have partners like American Forests who recognize the importance of this work and are willing to help enthusiastic and willing local partners fund what could be the most significant reforestation work being accomplished in the southwest.”

Of course, efforts like these only occur with the cooperation and generosity of private land-owners. A particular site for action recently is the Yturria tract, named after the Yturria family. With private landowners pledging to help restore the native thornscrub, the Fish and Wildlife Service can add more to the refuge than ever before.

“Forward-thinking ranchers, such as Dr. Yturria, are also setting aside land and establishing conservation easements that will protect habitat long into the future,” said Slagle.

The Yturria tract is a start, and the more that can be done to protect this environment and its inhabitants, the better.

“We must keep working to expand the Reforestation and Restoration Program and the LRGV Learning Landscapes Program to encourage conservation easements and other mechanisms for protecting existing habitat from future development, and to educate the local population – particularly the youth – about the importance of the habitat and our responsibility to protect as well as enjoy it,” said Slagle.

With nearly 2,000,000 trees planted in partnership with American Forests, that protection is well underway. 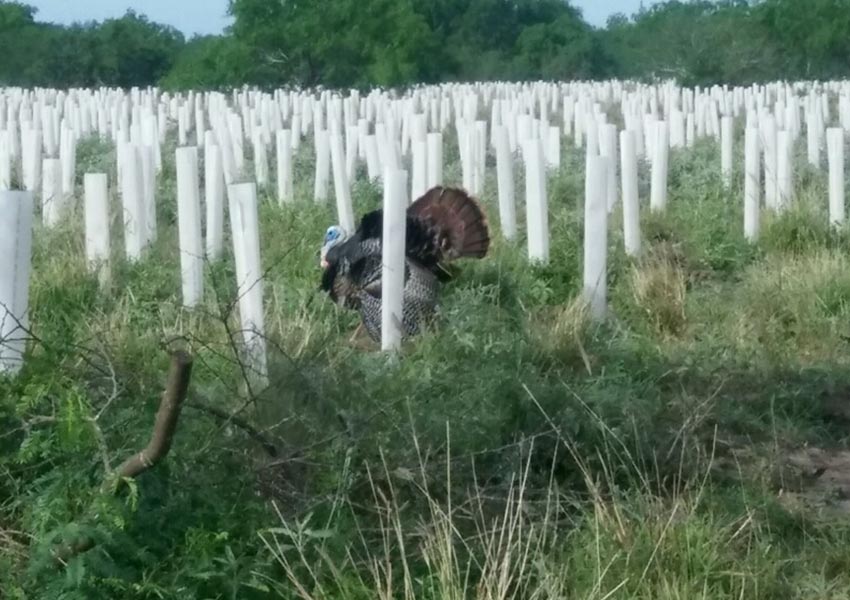 The plastic tubes may seem out of place, but they protect the seedlings and help conserve water. This local doesn’t seem to mind them too much! Credit: Friends of the Wildlife Corridor.