How large does the blue spruce grow? 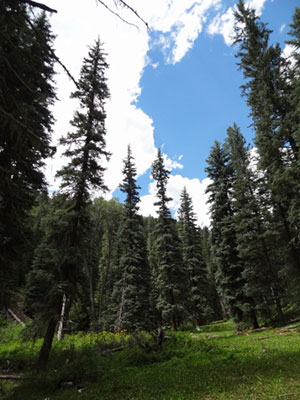 The 324-point blue spruce spotted by Will Blozan. Credit: Will Blozan

How tall do blue spruces grow? Ornamental yard trees often reach 60 to 80 feet and 1.5 to three feet in diameter. Ostensibly reliable internet sources vary greatly on listed maximum heights. Some say more than 100 feet. Others cap the species off at 80, while one source lists 50 meters, or 164 feet. There’s little agreement, but the species pays no attention to such nonsense. Blue spruces know what they’re genetically programmed to do, and in southwestern Colorado, the blues achieve their best growth. The Western Native Tree Society (WNTS), supporting the American Forests National Big Tree program, discovered a blue to break all records in the La Plata Mountains this August.

Near Hermosa Creek, the team of Will Blozan, Matt Markworth, Larry Tucei, Chris Morris and Mark Rowe measured a huge blue at 165.5 feet tall, 12.5 feet in girth and 32.5 feet average crown spread. It was eagle-eye Will’s discovery and totals 324 points via the American Forests champion tree formula. The current national champion in Utah totals 331 points, making the Colorado tree a contender for co-champion under the large-tree rule — that a tree that measures within five percent of the champion’s points is eligible to become co-champion. The intrepid team also measured another blue at 164 feet tall and 10.1 feet around. But that was hardly the end of the discoveries. 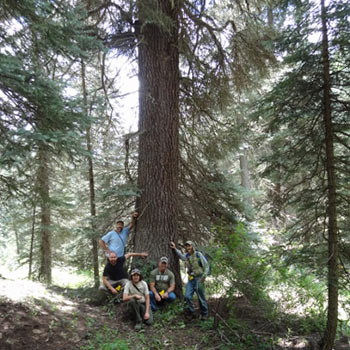 The team at the base of the 324-point blue spruce. Credit: Will Blozan

Later, going solo, Matt confirmed a 155-foot blue with a 12.9-foot girth and 33.5-foot crown spread, earning the specimen 319 points and making it eligible for co-champion. Then it happened: Matt measured a pencil-straight giant at an astounding 178.8 feet, the tallest we know of — anywhere. The tree measures 10.9 feet in circumference. Its narrow crown averages only 23.5 feet for a total of 309 points. It may not be eligible for co-champion this year, but it’s height has blown records out of the water. It seems to be part of a trend; Matt measured other blues between 162 and 158 feet high. The number of blues measuring more than 150 feet is growing.

Champion trees show us the full potential of their species and these Colorado blue spruces are a prime example of that. In October, the world will find out whether any of the trees had their co-champion status confirmed and made it onto the National Register of Big Trees. But, whether they end up wearing that crown, they have shown us not to underestimate the blue spruce.

An engineer by education, Robert T. Leverett is the co-founder and executive director of the Native Tree Society. He writes from Florence, Mass.

Note that these trees were all measured with LTI TruPulses (200s and 360s) using the sine method, accurate to +/- 0.5 feet. (See the American Forests webinar on measuring tree height.)