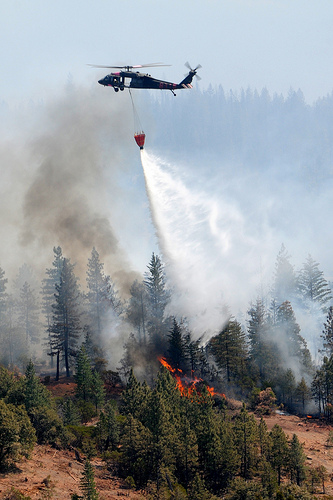 The western U.S. is experiencing one of the worst wildfire seasons on record with blazes leaving over 8 million acres scorched, according to federal data. Damage from these fires has impacted areas from the Rocky Mountains of Montana all the way down to Southern California and Texas. As fires continue to burn this year, the figures are quickly approaching the current record-holding year, 2006, in which 9.8 million acres burned. While there has been a general decrease in the number of fires over the last decade, the number of acres destroyed per fire has dramatically increased. Scientists have made the connection that fires are burning stronger and for longer periods of time as a result of climate change and hotter summer temperatures. According to a recent study published in the journal Ecosphere, over a third of the world will see increased wildfire activity over the next 30 years as a result of climate change.

Climate change poses a major problem for wildfires, but so does federal funding. Like all federal agencies, the Forest Service has had its share of funding issues as agency budgets continue to be cut. On August 23, Congress was notified that the Forest Service did not have enough wildfire funding for the remainder of the fiscal year. Considering how exponentially destructive wildfires have been this year, it’s not surprising that more funding is needed.

Luckily, the House of Representatives included $800 million in wildfire suppression funding for the Forest Service and the Department of the Interior in their Continued Resolution (CR) that will provide federal funding through March 2013. This was only after USDA Secretary Vilsack submitted a strategy that would transfer up to $400 million from other important agency programs. The House will vote on the CR this week and the Senate will consider a similar bill shortly after.

This all could have been avoided had the mechanisms put in place been used as they were intended. In 2009, the FLAME Act was created to make sure that the Forest Service would have enough wildfire funding without having to borrow funds from other programs. This emergency wildfire fund is in addition to the requested amount the administration submits each year – based on a ten-year average cost.  As averages go, some years will cost more and some will cost less. Additional funds from years that cost less get rolled over to make up for the years that cost more. But in tight fiscal times, it is difficult to leave “extra” money aside for future use when there is so much demand for it.

Mechanisms like the FLAME Act should be allowed to function as they are intended to, which requires fiscal responsibility from the administration and Congress. While out-of-control, dangerous fires need to be suppressed, other important programs of the Forest Service and the Department of the Interior shouldn’t be underfunded as a result. Visit our Action Center and tell Secretary Vilsack to request emergency wildfire funding instead of tapping into other essential Forest Service funding.