Home/Blog/Forest Thinning: Too Much of a Good Thing?

Forest Thinning: Too Much of a Good Thing? 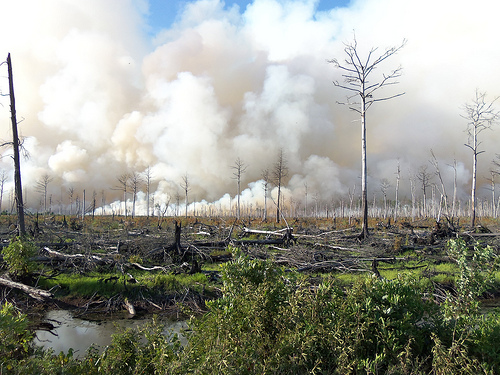 2011 was a record year for wildfires. Extreme drought conditions plagued the southwestern U.S. across Texas, Oklahoma, New Mexico and Arizona. The heat and dryness not only interfered with crops and livestock, but also caused one of the longest and most intense wildfire seasons ever. Texas, Arizona and New Mexico saw their biggest wildfires on record this past year. Over the years, forest managers have used various methods to reduce the risk of wildfire, and researchers continue to look for more effective management methods.

A group of researchers at Oregon State and Duke University just released a report that examines wildfire reduction efforts, making a connection between thinning and carbon emissions (a contributing factor to climate change). To reduce the risk of wildfire, forest managers use a process called “thinning,” in which small trees, branches and leaves that are most likely to burn are cut down. Previous research has suggested that thinning helps keep carbon sequestered, or trapped, in trees by helping prevent wildfires. However, this study reveals that thinning might actually contribute to more carbon emissions. For thinning, trees that would normally store carbon are being cut down. In fact, the study found that “for every unit of carbon that is saved by not burning in a fire, as many as 20 units will be removed and potentially not stored when trees are harvested.” David Cleaves, climate change advisor at the USDA Forest Service, states that thinning has been used to reduce the risk of wildfire, but carbon has not been considered as a factor in the use of thinning until recently.

Is this a case of having too much of a good thing? Dr. Mark Harmon, one of the study’s authors and professor of forest ecosystems at Oregon State University, seems to think so. Fire has always been a part of the forest life cycle, and Harmon notes that when trees survive fires, they become less prone to burning and actually store more carbon than those that are highly flammable. Since flammable trees are the first to set fire, this means wildfires release less carbon than we think. Harmon also suggests that the probability of severe fires, like the ones in the Southwest this year, is very unlikely.

Protecting forests and communities from fire is still very important, and thinning remains a critical part of that, but it doesn’t help reduce carbon emissions. In an effort to reduce emissions, we have to be careful with the amount of thinning done and incorporate other prevention measures.

For more information, check out the following links: