I have a love-hate relationship with red-eye flights. On one hand, they maximize daylight on day one to explore my destination, which I love. On the other hand, it usually takes a day or two to shake off the cobwebs from poor sleep, which I don’t love. As if one night isn’t hard enough, just imagine taking a red-eye flight for two weeks straight. Oh, and you are also the pilot.

This is the journey the Kirtland’s warbler (KW; Setophaga kirtlandii) makes twice a year, traveling 1,700 miles in 16 days from the Bahamas to Michigan in spring, and back again in fall.[1] Even though KWs pass though many eastern states, they are rarely seen outside of their wintering and breeding areas due to a low-but-rising population and because they migrate at night. After such a journey, it’s hard to blame them for being one of only a few warblers to nest on the ground. 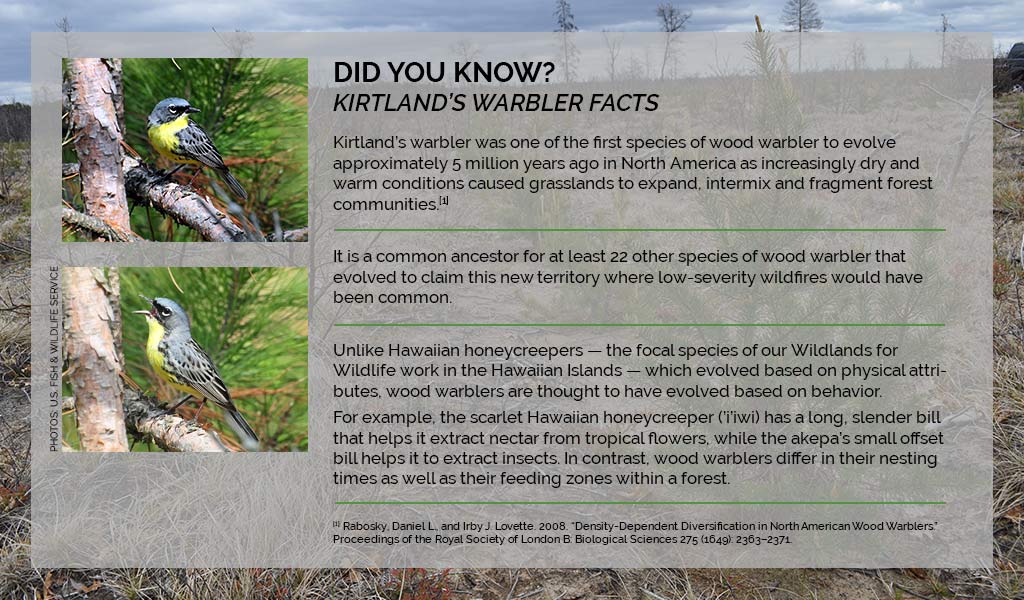 Today, in a region once again dominated by closed-canopy forests, prime KW breeding habitat includes a limited patchwork of dry, low-fertility and fire-prone lands in Michigan. This already limited breeding range, combined with modern wildfire suppression policies, interrupted a cycle critical to KWs and caused its population to plummet, leading to federal protection under the Endangered Species Act in 1973.

Conservation efforts over several decades have expanded the warbler’s population from approximately 400 to more than 4,000 birds.[2] American Forests’ very first Global ReLeaf project in 1990 created KW habitat in Michigan’s Au Sable State Forest and, in total, we have planted 2.3 million trees across 2,600 acres in wildlands projects specifically for KW habitat in Michigan. We have also helped restore another 1,500 acres of potential KW habitat close to new breeding locations in Wisconsin.

Beginning in 2017, we are significantly stepping up our commitment to recover KW through a five-year partnership with Michigan Department of Natural Resources that will plant 5 million trees on more than 4,000 acres. Without wildfire, older jack and red pine must be harvested and clear-cut areas replanted with seedlings, because only fire or extremely hot summer days will soften the sticky, resin-covered pinecones enough to release the seeds. While some revenue is made from harvested trees, in this region it is rarely enough to offset the cost of replanting. In the first year of our partnership, six sites in Gaylord, Greyling and Roscommon State Management Units will receive restoration plantings accounting for 25 percent of the statewide annual restoration goal.

In addition, American Forests is partnering with the Canadian Wildlife Service to kick-start Kirtland’s warbler habitat restoration efforts in Ontario. There are a couple of known breeding locations in the province, but a lack of suitable habitat is limiting their recovery. As climate change shifts habitats northward, jack pine restoration in Ontario may become important to the continued recovery of Kirtland’s warbler.