Home/Blog, Lifestyle & Trends/Book Review: “Around the World in 80 Trees”
facebooktwitterEmail 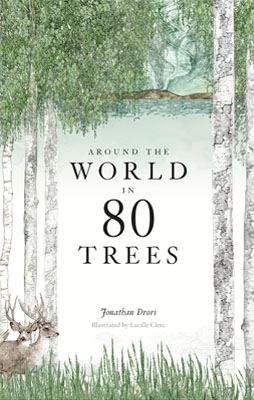 “Around the World in 80 Trees” is a detailed guide on 80 different tree species, some of which are familiar while others the reader has probably never heard of. The book is described as a collection of “strange and true tales,” but would be more aptly categorized as an assortment of tree biographies. Lucille Clerc’s colorful and botanically accurate illustrations bring to life the meticulous descriptions of each tree’s foliage, stem, fruit and flowers with vivid, detailed flair.

“For me, the most satisfying tree stories are the ones in which a piece of plant science has surprising human ramifications,” writes author Jonathan Drori in his introduction.

Drori stays true to that declaration in his writing. As Drori lays out the histories of various species, both traditionally and in modernity, you get the feeling that he might be something of a tree whisperer himself. While keeping the reader engaged with interesting tidbits — did you know that date palms lack the standard woody tissue that characterizes trees or that white willows contain salicin, a chemical used to make aspirin? — Drori gives the reader the ability to piece together a map of tree diversity around the world through not just the tree species, but through the humans who have discovered and utilized the species over time.

In fact, one of the things that makes Around the World in 80 Trees stand out is its refusal to look at trees and species individually; instead, it examines how tree species have connections to other tree species, as well as the different ways in which trees and humans have interconnected over hundreds and even thousands of years.

Though more than 60,000 species of trees exist, the 80 selected by Drori were selected to illuminate the diversity of trees across continents. As such, the reader gets a snapshot look at would otherwise be too much information for anyone but an expert to contend with. The species are organized by location, making the book feel like a trip around the world in more ways than one as the reader hops from country to country. Occasional footnotes connect certain species with similar properties so the reader has the option to explore the species through what they have in common rather than geographic location.

Though not a book that most would sit down and read cover-to-cover (unless you really, really love trees!), the short vignettes that make up the book create a visually pleasing and easy to read volume full of botanical and cultural information. For casual plant lovers, hobby botanists and even more experienced professionals alike, this rich work is worth the read.

See the highlights of American Forests on the silver carpet for the 25th annual SAG Awards!

Learn more about our partnership with the SAG Awards and more in this week’s Forest Digest!

25th Annual SAG Awards® Partners with American Forests to Enhance and Restore the Environment Through the Planting of 25,000 Trees

The SAG Awards are this Sunday, and American Forests is partnering with the awards show to celebrate its Silver Anniversary by planting 25,000 trees across the country!