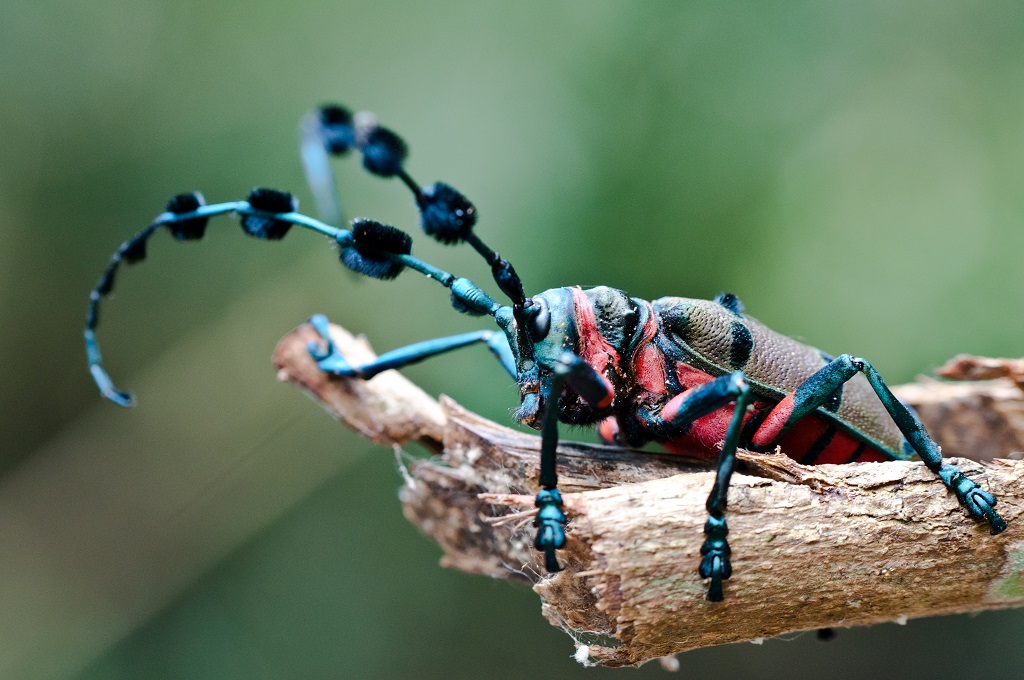 Would you believe me if I told you that bugs are actually the good guys? Well, maybe not all the time, but when it comes to forest ecosystems, bugs save the day. We need them to carry out essential processes like pollinating plants, recycling nutrients, sustaining the food chain and keeping forests in check.

Pollinators and seed spreaders are major players in forest ecosystems. 80% of all trees are pollinated by insects. Bees, wasps, flies, beetles and butterflies drink nectar, eat pollen from flowers and deposit it in other flowers, pollinating new blooms. Ants carry a heavy load as well; they’re responsible for the germination of more than 150 plant species. They collect and carry seeds to bring home and eat, but the lucky ones that don’t get eaten end up germinating along the ant’s path. This way, ants allow the seeds to travel long distances without the need for wind.

Insects don’t just snack on seeds and nectar, though. They also eat leaves and needles, and in doing so, regulate available nutrients and energy sources in the soil. Insects process the organic matter and deliver it into the soil as broken down nutrients, which is much more accessible to microorganisms in the soil, and much easier for plants to use for growth.

Once a tree has died, it’s up to insects to start recycling the tree’s nutrients back into the earth. Decomposing wood, though, is a whole ‘nother story from leaves and needles. It’s harder for microorganisms to break down wood and bark than it is to break down leaves and plants. The bark protects the wood from being accessed, thus preventing decomposition. This is when insects come to the rescue: they drill holes down into the trunk so that fungi, microorganisms and other insects can enter and start working. If insects didn’t drill those holes the decomposition process would take twice as long.

Once they have access to the wood, “pioneer insects” such as bark beetles, longhorn beetles, jewel beetles, timber worm beetles and wood wasps gather around to feed on the bark and sapwood (the outermost layer of the trunk’s wood). The wood then begins to decompose. When twigs fall off, different insects gather, and bacteria and fungi get involved. Finally, the wood is broken down so thoroughly that it’s almost soil — it becomes a dark, thick, nutrient rich material called humus. ants, fly maggots, beetles, mites and springtails set up camp in the humus, and whatever rotting wood is left gets occupied by worms and snails. They move the decay along to create even more surface area for microbes, and eventually everything breaks down, leaving us with soil.

Think that sounds tough? Well, there’s even more. The important task of monitoring forest health is humbly carried out by insects called bark beetles. In a healthy ecosystem, these beetles recognize weak or sick trees and feed on them to kill them (putting them out of their misery, if you will). In doing so, they improve the overall health and sickness resistance of the forest, and the dead tree decomposes and returns its nutrients to the soil. Unfortunately, many forest ecosystems have become unhealthy due to climate change and fire suppression. The normally sustainable beetle populations have exponentially increased, and have essentially over-performed their role, devastating endless swathes of forests. The process by which a forest would normally stay healthy by trimming the fat has overcorrected.

Clearly, by eating all the leaves, wood and bark that they do, insects are a crucial link in the food chain. But bugs get eaten too. Many forest creatures depend on bugs as a food source: birds such as woodpeckers, warblers and sparrows, as well as mice, shrews, bats, salamanders, frogs, toads and lizards, just to name a few. Some insects even eat other insects! Predatory or parasitic insects benefit their ecosystems by eating overpopulated or invasive plants or other insects, in order to keep pest or weed populations under control.

If the huge accomplishments that these tiny creatures can achieve isn’t impressive, I don’t know what is. Without bugs, we couldn’t have healthy forests. Without healthy forests, we wouldn’t have the air we breathe or the water we drink. So think twice the next time you swat that fly away, and look out for worms crossing the sidewalk, because as surprising as it may be, you need those little guys more than you think.