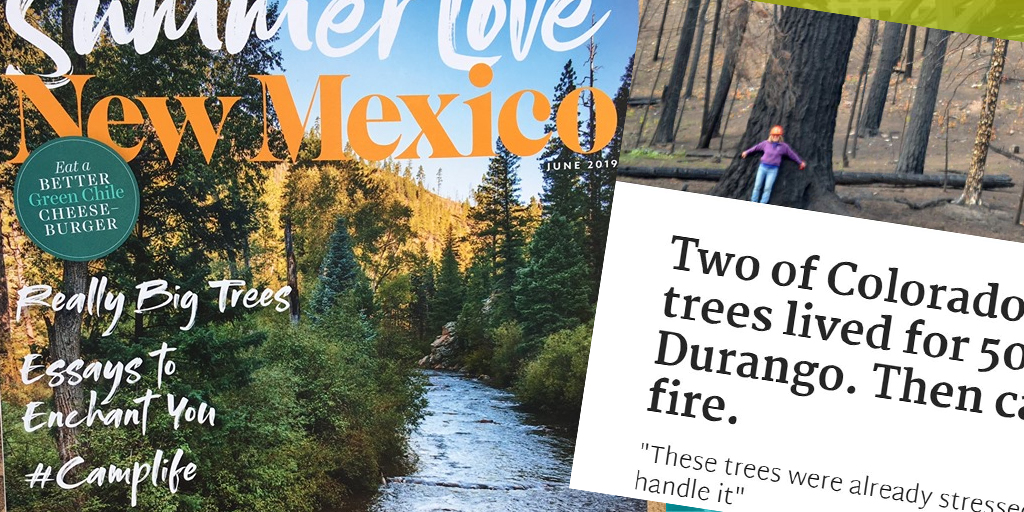 This week we continue our July celebration of America’s legendary trees by highlighting Champion Trees in the press. American Forests isn’t alone in spreading the news far and wide about our national Champions! In the last year alone, the program has received great exposure, particularly in state and local publications featuring trees nominated for local and national registers. This showcasing not only gets the word out about exceptional tree specimens; it engages the public to hunt for Champions and broadcasts American Forests’ message of forest conservation and stewardship.

For example, the Columbus Dispatch outlined our partnership with the “Ohio Big Tree Program” in an article on a giant sycamore in Ashland County. This tree, which predates Ohio statehood, is the state’s biggest recorded tree and has caused some excitement! It was so exciting that U.S. News and World Report also documented the finding.

New Mexico Magazine shares with its readers that the search, which began in 1940, for big trees continues. New Mexico claims a lot of specimens, many of them champions, because of their ecological diversity—mountains, river bottoms, lava fields, and deserts.

Earlier this year, in celebration of Arbor Day, the Grand Island Independent promoted Nebraska’s forest resources with the announcement of state Champion Tree winners. While not all made it to our National Register, a wide variety was praised, including an eastern cottonwood, an American elm, a Chinese elm, an American linden, a silver maple, a red mulberry, a pin oak, a northern red oak, and a Scotch pine.

Delaware News also shared information on the state’s own “Big Tree” program, which is affiliated with American Forests’ National Register, explaining in detail how a tree gets nominated for the honor of being listed. The news story lauded Delaware’s sole Champion Tree, an Osage-orange (Maclura pomifera) in Wilmington. At 412 points, the tree is actually considered a “co-Champion” because it scores within the three-point rule of two trees located in Virginia (416 points and 414 points respectively).

Late last year, the Colorado Sun lamented that two of the largest trees in the state didn’t survive the destructive 416 Fire. One, in particular, blue spruce, was one of nine nationally recognized trees in the state. A Douglas fir, a State Champion that had been unseated on the national level some years earlier, was also charred and burned in the San Juan National Forest. While this was sad news, it brought awareness to our Champion Tree program, as well as to the importance of efforts to prevent forest fires.

And just last month, in June, the Napa Valley Register featured a story on a giant Paradox walnut growing amidst the local vineyards. After discovering the tree, the article’s author submitted it to the California state register for nomination and found that the 50-foot-tall walnut, almost 24 feet in trunk circumference, could possibly be over 140 years old!

These stories are just a sampling of the excitement that our National Register of Champion Trees elicits every day. Learn more and follow along as we share additional stories on America’s legendary trees throughout the month of July – and find out how you can participate in the Champion Tree program and other American Forests conservation efforts.