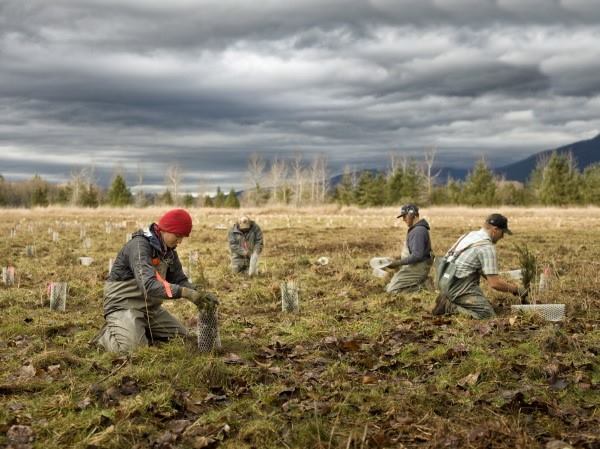 The Skagit Wild and Scenic River winds through dense hemlock, massive spruce and stately red cedar forests, feeding lush farmland and providing rich marshland habitat all the way from the North Cascade Mountains to the Puget Sound. All five native species of Pacific salmon push up the clear waters to spawn. Wild elk roam the more remote banks while black bears, mountain goats and cougars traverse their wilderness territory. The watershed is home to the largest population of over-wintering bald eagles which perch their nests high up in the firs, as well as trumpeter swans which float in the flat water and black swifts, one of the most elusive birds in the world, which hide behind waterfalls and in the crevices of riverside cliffs.

While the Skagit River Basin may sound like a marvel of plentiful wildlife and beautiful forests, this incredible area is at a dangerous time of uncertainty. Agriculture cleared much of the river’s banks, industrial forestry leveled important habitat and damming disrupted the natural flow of the river. As a result, there is less habitat to support the rare wildlife, and invasive species are creeping in. Salmon populations, which Native Americans in the region historically relied on as a primary food source, are dwindling to alarming lows, and less than two dozen grizzly bears roam the North Cascades region of the watershed.

Realizing how important the incredible Skagit River area is, American Forests set out this spring to restore this essential riparian habitat through our American ReLeaf program by partnering with government agencies and local conservation organizations — the U.S. Forest Service, the Skagit River System Cooperative and Washington State’s Salmon Recovery Funding Board. Together with these partners, we planted 13,000 saplings from locally collected seeds of western red cedar, Douglas-fir, Sitka spruce and cottonwood, which are all native species. Volunteers from the Skagit River System Cooperative gathered to put the trees in the ground across 24 acres of U.S. Forest Service land, strategically planting the small seedlings within protective tubes and braced by bamboo stakes.

Over the coming decades, these sections of gangly saplings will transform from cleared pasture overrun with invasive grasses into forested riparian habitat filled with native tree species that shelter some of the most extraordinary wildlife on earth. As the newly planted trees mature, their debris will provide shade and shelter along the banks of the river, enhancing salmon habitat in eddies and backwater marshes. As the salmon populations replenish, so will the black bear, bald eagles and all the wildlife that rely on the salmon’s proliferation.